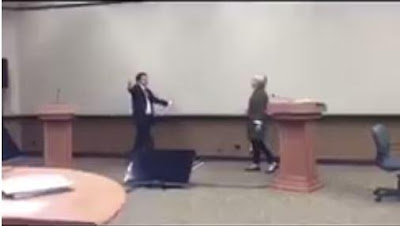 Hillary Clinton's former aide Philippe Reines shared this hilarious video of the former secretary of state and presidential candidate, practicing how to avoid an unwanted hug from Donald Trump ahead of a debate during the 2016 election.
In the video shared on Twitter, Reines stood in as Donald Trump and is seen trying to force a hug on Clinton who jokingly ran away from him as they practiced for the debate in September.

Captioning the video, he wrote: 'Not easy to avoid the unwanted Trump hug, sometimes it even takes practice ... A favorite moment from debate prep (9/24/16).'